Services Available 24h
Dating with one hour in advance

Take a look of all Escorts in Madrid

Come on, the best Russian Escorts in Madrid are in Escort por Madrid 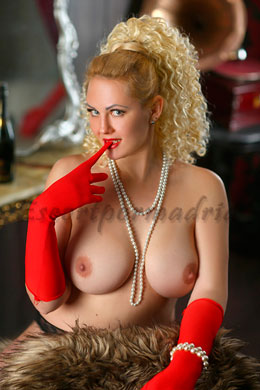 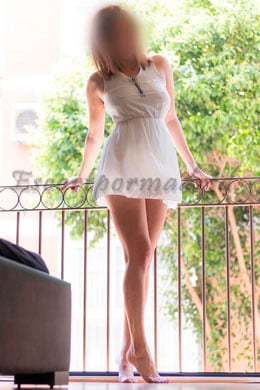 Are you a Russian lover? Have you ever fantasized about that white-skinned, hard-looking woman for the best sex?

Many men are looking for Russian escorts to try a different type of woman, to fulfill their fantasies and discover what sex with a woman from the north is like.

The Russians have a lot of fame in the world of sex, and between that and the low offer of luxury Russian escorts, they are even more desired by many men.

It’s not easy to find Russian escorts in Madrid, so we wanted to bring together all the Russian escorts in our agency in a single page. So that if this is the fundamental characteristic you are looking for in a woman for your next appointment, you can find it easily and quickly.

You no longer have to search through all the ads to see what nationality each of the women advertised is. On this page, choose the woman of your choice for your next appointment, be assured that she is a Russian escort.

Russian escorts are one of the most wanted escorts in Madrid. Among the many nationalities that you can find in Madrid in terms of escorts, the Russian escorts of Madrid attract by their scarcity, discretion and how different they can be with respect to the Latin escorts to which we are more accustomed thanks to their different personality for which many men feel an authentic fascination that is very difficult to describe with words.

The Russian escorts Madrid are perhaps the most opposite escorts that can be found to that Latin character of the Spanish-speaking escorts, a character that can sometimes be described as cold but that in reality hides a passion and a sexual desire much higher than many escorts of different nationalities. One of the ways in which men choose the type of escort they want for a certain occasion is depending on their nationality, thus sometimes looking for oriental escorts in Madrid or Spanish, Latin escorts….. And is that there are different escorts to please all kinds of palates, there are so many and so different from each other, whatever it is that you are looking for sure you are able to find it.

For a few years now, there has been a surprising increase in the demand for escorts of a nationality that was not usual for luxury escorts in Madrid, and that is Russian escorts. A demand that many do not know how to explain but that we know the exact reason why it happens, and that reason is none other than to discover how special the Russian escorts are in contrast to the Latin luxury whores we are used to meeting in the Mediterranean countries.

These ladies stand out for their different beauty, a beauty different from what we are used to. Women of white skin and as we all imagine a Russian escort, blondes of smooth and soft skin, fleshy and red lips…. of those women who fall in love just by looking at them.

What do Russian escorts have in Madrid?

As we have said, almost everyone when we talk about a Russian woman imagines that prototype of woman so typical of men. Those blondes with light eyes, red lips and big tits. This is perhaps the main reason why many men look for a Russian escort when they are looking for sex in Madrid. Their physique is so striking and different, something that they are not accustomed to finding in a woman in her usual day-to-day life because, let’s not kid ourselves, how many women who share these characteristics are we used to seeing every day? The answer to this question is none or almost none.

But Russian escorts are not only famous for their spectacular physique. They are also known for the way they are in bed. Because of that personality that is not as cold as it may seem or appear at all because of its serious appearance or because of the simple fact of coming from a country like Russia, where sex is so frowned upon.

And in bed, Russian escorts are usually one of the hottest escorts you can find. Wild and fiery as you could not imagine behind that cold and rather serious look. But when a Russian escort gives you a smile, you fall in love. A warmth that the average Russian girl doesn’t usually show but that the Russian luxury escorts know how to take advantage of, developing to the maximum her most attentive and complacent facet, a facet that you will enjoy enormously.

Many are the men who have been surprised to hire a Russian escort, but most of them for good. And so its recommendations to other users and that increased demand for this type of escorts.

But you have to like this type of woman, if you are a lover of the Latin character, more extrovert and open, someone who enjoys a lively night to enjoy, why not, a sensual dance and well stuck, maybe you should try another type of escorts.

How do we imagine a date with Russian escorts in Madrid?

Anyone looking for a Russian escort is looking for wild sex with a very special beauty. The ideal dates with Russian escorts are in your room, in bed. As escorts for events, dinners or any other type of date, they may not be the ideal escort. This imposing seriousness is sometimes not the best for social events and they don’t usually speak the language perfectly.

For this type of escort service, it is better to have Latin escorts, with a more extroverted character who never leave elegance aside. Companion ladies who know how to behave and show their most pleasant and cultured side to others and used to this type of social events with important people. This does not mean that Russian escorts are not an option when it comes to attending events of this kind, they are of course professional escorts who are always able to leave you in a good place, whatever the appointment.

But it’s in bed when these luxury Russian whores are 100% recommended. Because behind that appearance of coldness and sobriety are hidden wild women who love sex. Many find it very morbid to have a serious and imposing woman who then gives everything in bed and cuts herself to nothing. Perhaps one of the most daring escorts when it comes to the truth, an explosive mix that drives many crazy.

How to find a Russian escort in Madrid

It is not easy to find luxury Russian escorts in Madrid. And beware, we’re talking about luxury escorts, not whores. When we talk about sex and Russian women, we often think of those women who work as prostitutes in the street, and in this case we do not talk about that.

They’re a very different kind of whore. Russian luxury escorts are not easy to find in Madrid. They come from a country where sex is more than taboo, where not even a couple can show their love on the street. That is why not many women are involved in this in Spain, as they do not see it as acceptable.

But even so, there are Russian women who come to Spain and it seems that they are free from the social pressure in which they have grown up with things like not being able to kiss in the street or even talk about sex with their friends. This pressure is much lighter in this country and many girls are grateful for it because it allows them to develop more as individuals and as women.

Maybe that’s why, maybe because of other things that escape us, these women from Russia who come to Spain and decide to dedicate themselves to the world of escorts are among the most ardent and fiery. That mixed with that air of sobriety makes many men go crazy for this type of escorts.

But like we said, it’s not easy to find. They are also very demanding women, you will only see them working for the best luxury escort agencies, and temporarily. In other words, they do not do this for a long period of time in the same place or agency.

But this is like everything else, and if you look, you find. Any luxury escort agency like ours or large directory of luxury prostitutes offers you the possibility of filtering the escorts according to their nationality and thus facilitate your search. In this way you can search for your escort only among Russian women, or if you prefer the less cold character of this country, you can search for any other nationality.

So you don’t have to look any further, choose the escort that best suits your needs, the one you already imagine yourself in the same bed enjoying the best sex, and call at any time of the day or night. We will attend you as long as I want to give you what you are looking for. Today you can have that date with a Russian escort you’ve been dreaming about.

This website uses cookies to improve your experience while you navigate through the website. Out of these, the cookies that are categorized as necessary are stored on your browser as they are essential for the working of basic functionalities of the website. We also use third-party cookies that help us analyze and understand how you use this website. These cookies will be stored in your browser only with your consent. You also have the option to opt-out of these cookies. But opting out of some of these cookies may affect your browsing experience.
Necessary Always Enabled
Necessary cookies are absolutely essential for the website to function properly. This category only includes cookies that ensures basic functionalities and security features of the website. These cookies do not store any personal information.
Non-necessary
Any cookies that may not be particularly necessary for the website to function and is used specifically to collect user personal data via analytics, ads, other embedded contents are termed as non-necessary cookies. It is mandatory to procure user consent prior to running these cookies on your website.
SAVE & ACCEPT